While I was experimenting with these new microprocessor devices a friend of mine, Phil Clogg, became interested in what I was doing. As the drummer of the band we were in had to leave due to getting a new job, we were talking about what to do next. I suggested that we do something really different.... base a new electronic band, a duo, around a microprocessor sequencer and percussion unit. Phil laughed, but when he realised I was actually serious he thought about it and said  OK let’s give it a try. Before we knew it I’d finished the sequencer project described on the previous page and we had formed the electronic band “Out of Control” (<full story on this link). As the eighties were born, we must easily have been the first rock-computer based band (duo) in the UK. Nowadays, a mere 30 odd years later, of course virtually all popular music is created and/or recorded on computers. In “OOC” Phil sang, played electric guitar and synthesiser pedal board, which controlled that first synthesiser I built. I handled the computer, its improvisational controls, played the modular synthesiser and did most of the knob twiddling. We played a loud-aggressive form of electronic rock,  with a kind of ancient mysteries slant. This really suited the biker side of me. We even built a special horn-loaded PA system to give the whole thing plenty of punch. We gigged regularly including  a regular resident gig at a North East pub. We alternated each week with a little known band called “Prefab Sprout”. “Out of Control” though never attracted more than a local following or did we ever record an album, but a 3 track studio demo tape exists and some rehearsal tapes, These I’ve put together, cleaning up the rehearsal tapes a bit, as a free downloadable mini album. This is included as both a bit of unique musical history and a thank you to Phil for all his hard work. See CD section.

After “Out of Control” I produced my first electronic music album “Where Dark Forces Meet” using this system . I was also able to make use of a Practical Electronics magazine string synthesiser I’d built for my girlfriend at that time (picture opposite), a strange thing to do for your girlfriend but I did for some reason! I remember I had soldered about 500 diodes in it!

A year or two later the computer sequencer was radically upgraded to 12 bit control accuracy and expanded. It became polyphonic, with 15 simultaneous multiplexed sequence voltage control outputs for notes or control, plus some additions to the original electronic percussion line triggers. The machine code software including some interesting input routines had expanded to well over 3KByte of ROM! With this unique system I was able to perform  complete solo concerts with full sounding computer and manually controllable polyphonic live electronic backing. To this I added a “Godwin” string machine to produce really full sound that I could both play and control solo. This became the rig I used in the pictures in the “About Ron Berry” section. 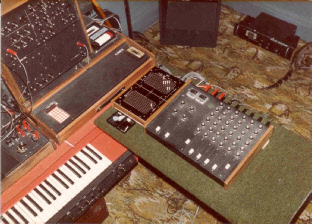 Synthesiser  rig, around the time of the album “Where Dark Forces Meet”.

ACOUSTIC MODELLING on an analogue modular synthesiser....    [circa 1984 ]

An interesting article I read, about the physical modelling of plucked strings  (by Kevin Karplus and Alex Strong) using a large mainframe computer, got me excited and pointed the way to where it might just be possible to go next. As I read, my eyes started to glaze over again at the thought of creating a real acoustic-sounding electronic instrument!  I thought this was the future but I didn’t have a main-frame computer and I was never likely to have one! However, I thought there was a good chance it could be done on an extended modular synthesiser, since it was really a specialised form of analogue computer anyway. Physics is physics no matter how you do it I figured. Well, about two years of hard struggle later later the box on the left of the picture opposite was completed. To make room, the old computer driven synths were moved to the long box sitting on top of the main synthesiser. 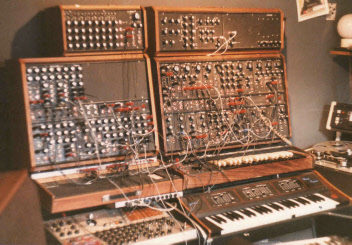 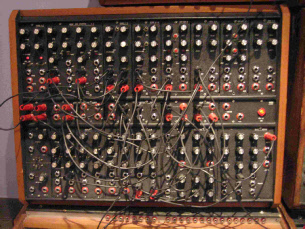 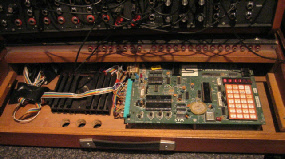 Sym1 microprocessor with the top off 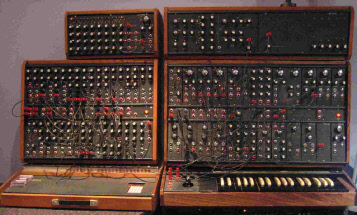 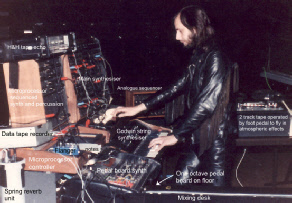 The new unit, pictured above (left case),contained all the extra things I needed. Most important are the resonating electronic analogue delay lines modules based around what are generally called charged coupled devices or CCDs. With these the input signal is sampled, as it is in the digital world, but with the samples remaining as analogue electrical charges which are passed along a long string of tiny charge storage capacitors until the samples emerge at the other end. When the output is fed back to the input in various ways you create a resonator with very acoustic properties. I really struggled for some time to get the circuits right but got there in the end.
Because acoustic modelling uses the excitation and interaction of electronic devices to specifically mimic the physics of the real world this synthesis method produces some remarkably acoustic sounding instruments as opposed to electronic sounding ones. I discovered many simple models for plucked strings, gongs and bells, trumpet, saxophone and clarinet, flute and many other strange hybrid instruments. A full description of all this in the “Acoustic Modelling” section.
Today acoustic modelling is common. It has been exploited on several commercial synthesiser designs and there are also modern software applications that use it too. I’ve even reproduced some of my early patches in Native Instruments “Reaktor” (a pure software digital kit of audio parts) and included them for free download on the site.
Over the following years I gradually added extra modules until the case (pictured left) was full. This is how it stands today. Along the top row (L-R) are... 2 LFOs, 1 dual envelope shaper, 2 dual voltage controlled delay line resonators, 1 dual envelope generator, 1 dual VCA, 1 dual envelope generator and 1 dual VCA. Along the middle panel are input/output lines to sockets on the back, computer control lines, common jacks, noise and +5 volt sources. Along the bottom panel (L-R)  are 1 special dual control voltage VCA module, 1 quad VCF module with LP and BP filter functions, 1 quad voltage controlled mid range delay line resonators, 1 dual multiplier/divider module and 1 3 x 3 mixer.
Sitting on top of it (top left) is an 8  x 4 analogue sequencer with internal VCO. Made around 1978, it’s based on a ring counter circuit. Each column step can be switched in or out, or the sequence looped back at various steps. An output selector can turn it onto 2 x 16 or 1 x 32 steps as well as the 8 x 4.
|  Home  |
Short exceprt of what it I performed on it  (MP3 128Kbit/s)